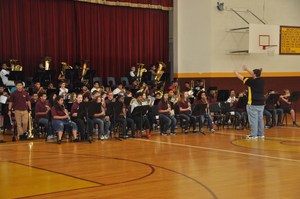 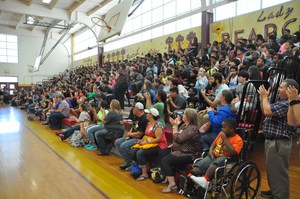 The pep rally began with sixth grader Latyea Hemphill singing the National Anthem beautifully for all to hear and was followed by a fun three-legged race between students and teachers!

Competitors in the three-legged race included the following pairs:

Additionally sixth grader, Deysi Rodriguez, was awarded a certificate of appreciation from the Temple Police Department; along with a Sonic gift card for her integrity in returning a lost wallet that she found and immediately turned into the school. WAY TO GO Deysi!!

Coach Montalbo and Coach Gibson also spoke on behalf of both the football and volleyball teams, getting fans amped up for the exciting Lamar Middle School games happening later this week!

Great job by all!! What an awesome time to be a LAMAR BEARCAT!!!